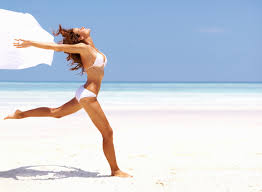 Bariatric surgery, including procedures against obesity (gastric banding, gastric bypass and sleeve gastrectomy), has grown rapidly in recent decades and can now release individuals from both the physical effects of obesity and its psychological and social implications.

After the loss of several pounds, which is the result of this kind of procedures, it is produced excessive sagging of the skin, due to the previous skin distension, the loss of fat and the reduction of tissue elasticity. This sagging usually appears in the abdomen, buttocks, thighs, breast, forearms (upper arms) and neck, making the body contour rough and the appearance unattractive. These problems, despite the fact that are now aesthetic, influence greatly the quality of life, since individuals find that they have again difficulties in their daily life, limited choices in the way of dressing, they can’t highlight the parts of their body that they hoped with the loss of pounds, avoid certain social situations or experience embarrassment in their intimate moments.

If you have lost a lot of weight, either by diet or surgical procedure, you are the ideal candidate for body contouring procedures. The success of these procedures, whether concern reduction or increase or lift, depends on many factors, such as age, body type, skin tone and mainly the weight stability. Although these procedures leave some scars, the most operated consider them acceptable and experience high postoperative satisfaction. After improving their body image  their life changes for the better and experience positive emotions and enhanced confidence wearing swimsuits, sleeveless shirts and generally clothes that leave uncovered body parts.

The procedures for aesthetic reconstruction of the body after a bariatric surgery can be performed either separately or in combination, achieving a total makeover of individuals undergoing them, with dynamic and dramatic changes in their external appearance. The plan of the procedures is usually the below:

1st stage: lift of the lower half of the body (lower body lift), lift of the medial surface of the thighs

At this stage are treated simultaneously the “hanging” abdomen, the droopy and saggy buttocks, the “love handles” and the sagging of the outside surface of the thighs, the excessive fat around the abdomen (flanks), as well as the sagging on the back of the body.

The incision extends circumferentially around the body and is not visible wearing underwear or swimsuit. Although in some cases of mild sagging, abdominoplasty can give good results, the circular lift (lower body lift) is the procedure of choice for achieving optimal results.

With the lift of the medial surface of the thighs is treated successfully the sagging in the interior side of the thighs, the excess skin is removed and their youthful appearance is reverted. The incisions are not visible because they are made in the groin crease.

Changes in the shape and size of the breast are yet another inevitable consequence of the large weight loss. Breast lift raises and remodels the drooping breasts by removing excess skin. However, in cases of intense sagging, breasts may still be level and shall be also necessary breast augmentation, with which breasts’ lost volume can be restored.

With brachioplasty the excess skin and fat of the arms is reduced and their contour is improved. The incision lies in the lower surface of the arms, so that, when they are in horizontal position, it is not visible from any side.

Facelift is the most effective way to address the sagging face and neck after the loss of many pounds. It restores soft tissue ptosis from these areas, while restoring fat to some other areas that have been “emptied”, giving a lifted, renewed, more youthful and less tired face.

Meanwhile, at this stage are made any aesthetic improvements are needed in order to be optimised the result of the procedures which were performed in the previous stages.

The interval between the stages varies from a few weeks to several months and depends mainly on the general health status of the candidate.

Apart from the impressive results that causes to the external appearance of the individuals, the “total makeover” of the body equates symbolically with a personal transformation in all fields of their lives, as they say themselves postoperatively. In recent years, thus, plastic surgery, with its great potentials for addressing the most characteristic problems after massive weight loss, is considered the second and more decisive step towards the effort of the obese individuals for a longer-lasting, healthier and more fulfilling life.

Careful research and an experienced, well-trained plastic surgeon are guarantee for your successful total makeover!