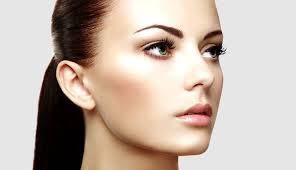 Rhinoplasty can dramatically improve the overall image of the face and is one of the most frequently requested plastic surgery procedures by men and women. It is a safe procedure with high levels of postoperative satisfaction, since the results are permanent and brings about great and dynamic changes in the lives of individuals submitted to it –when it is successfully performed by an experienced plastic surgeon.

Rhinoplasty remodels the shape of nose, by reducing or increasing its length, removing hump, changing the angle between nose and the upper lip and mainly by changing the shape of nasal tip using sutures and modifying cartilages memory. It is a procedure – challenge for the plastic surgeon, firstly because the anatomical variations of the nose make each procedure unique and secondly because, alongside the aesthetic effect, it is important to be achieved the absolutely functional (e.g. correction of nasal septum deviation and hypertrophic turbinates) that is nasal breathing (a nose that does not breath, whatever it is beautiful…). Also, the procedure occurs if there is a congenital malformation (e.g. hare).

Rhinoplasty can improve the appearance and self-confidence of the individual, but it is not in itself a panacea for its perfection (especially if there are other imperfections, such as an hypoplastic chin) nor can it change the way it is treated by others. So the person who is interested in improving –and not necessarily perfecting- his appearance, who is emotionally stable and has realistic expectations, is a good candidate for rhinoplasty. At the first examination, after taking photos of high precision, they are pointed firstly the areas that someone would want to change, it is made an assessment of the nose and the face and are explained the factors that may affect the procedure and its outcome. These factors include the shape and size of the face, the maxilla and mandible occlusion, the structure of bones and cartilages of the nose, the thickness and type of the skin, the age and certainly the expectations of the candidate. As far as age is concerned, younger candidates need to be at the end of their adolescence (17-18 years) in order to have be completed the development of the facial skull, but also to be emotionally mature. That is why when they ask rhinoplasty earlier than this age, perhaps from the parents’ desire, a new examination should be recommended at a later time.

Achieving harmony of the nose with other facial features highlights the necessity of personalization for rhinoplasty to be successful. At individuals who come to the medical office holding a photo of a celebrity and ask to have the same nose, we say that this nose is ideal for that particular face and may not fit them. Therefore, good communication between the candidate for surgery and plastic surgeon is very important to the whole process.

The modern tendency in rhinoplasty is the as much atraumatic and with faster recovery technique. The stakes are the natural, personalized and predictable –with millimeter accuracy– result, without the risk of restoring the cartilage to its original position.

In this context, my rhinoplasty technique is Nasal Memory Surgery. It is a “smart” technique, which is done with respect to the most important feature of the face, that is nose, and supports its name in the fact that the nose cartilages have memory: so, in essence we interfere and modify the memory of cartilages to not return to their original position. The hitherto classical view that most of the cases of rhinoplasty was mainly demanded tissue removal does not apply, since this process resulted in a skeletal nose with an unnatural, artificial and, most of all, unpredictable result that could be seen by any neutral observer.

The advantage of nasal memory surgery is that the minimally necessary amount of precious nose tissue is removed and the remodeling of the rest is done by using specialized microscopic sutures, which are placed at key points, allowing the cartilage memory to be refined. This avoids the risk that the cartilages will return to their original position after a few months, so that the aesthetic result is, in addition to be natural, permanent. This not only avoids the risk of post-operative breathing problems, but can also correct any existing aesthetic problems from previous failed rhinoplasties.

The procedure is almost painless, lasts one to two hours, is performed with general anesthesia and discharge note is usually given on the same day (day clinic). Return to work is possible in one week, while in dynamic sports after 5 weeks. The complete subside of swelling occurs in 1-1,5 months. The cost of rhinoplasty for aesthetic purposes is not covered by insurance funds unless coexists deformation of congenital or traumatic etiology and a respiratory problem due to nasal septum deviation.

Rhinoplasty with the dynamic technique nasal memory surgery ensures a natural and functional nose, resulting in a new attractive shape with free breathing.